11 replies to this topic

I just put my new SpeedBleeders on the car today and they're awesome. A spring-loaded ball bearing automatically opens to let fluid out when you pump the brakes and the returns to seal the bleed screw when you let the pedal back out. Turns brake bleeding into a 1-man job anyone can do. They also sell bleed bags (like a little I/V bag for brake fluid) that can just lay on the garage floor instead of having to keep them upright like a bleed bottle. And, if you order a pair of the bleed bags, you can bleed both screws on each caliper at the same time...

At only $7/ea, you should really check these out:

those look great! can you confirm which part number works with the r35? same as the pic above?

I've used them on lots of cars, and they work great. I once had an issue with one leaking at the threads when unscrewed to bleed the brakes. They sent me a new one for free, and I didn't even have to send the old one back, and new one worked fine. Never had an issue with spongy brakes when using them either. Some people have reported not being happy with them, but for me they have been just fine.

Yes, the one in the picture is the correct model for this caliper.

I also picked up a little bottle of sealer that you can apply to seal the threads if the original wears out after doing a bunch of bleeds. I guess it's not that uncommon if you loosen/tighten them often.

Nice find Robert! Don't think I will make VIR this weekend. Haven't gotten an update from AAM. Like I said they are prototyping new coolers on my car so it's taking them longer. Have fun.

3 AAM custom tunes with on the fly switching

Nice find Robert! Don't think I will make VIR this weekend. Haven't gotten an update from AAM. Like I said they are prototyping new coolers on my car so it's taking them longer. Have fun.

Sorry to hear you won't be there. I was just up at AAM yesterday (differential fluid change) and Clint mentioned that they were working on some stuff for you. Hopefully it will be back up and running for next time. I'll be back at VIR with Trackdaze next month if you're interested.

Another alternative if you feel concerned about replacing the stock bleeder valves is a vacuun type system like the Mity-vac. This also turns bleeding your brakes into a 1 man job and you don't have to climb in and out of you car. Just turn on the vacuum, and sit at your brake reservoir to fill it occasionally.

I am no longer active on this site.

reviving an old thread .. pi-man & descartesfool - how are these holding up for you? I had these on my motorcycle many years ago and were fantastic for bleeding brakes..

also what would be the bleeding procedure with speedbleeders for the gtr? I've never bled a car before and I'm just starting my research..

Been using thest on my R1 for years. I should get these for the R35. Completely forgot about it until I saw this thread. Thanks for the reminder!

They just keep on working fine. No issues. I don't drive cars with them in the winter, so no idea if corrosion is an issue, but I don't see that they would be any different than the OEM ones in that respect. Plus thread sealer likely makes them easier to un-screw than plain steel ones.

When you install them, brake fluid will leak out once you remove the OEM bleed screws, so make sure no fluid stays on any painted surface, including calipers. Once Speedbleeders are in, use a bleeder bottle with a clear line to fit over the bleeder nipple. I prefer to have two bottles, one for inside and outside bleed screw on the front calipers. Then just open them both just enough to bleed fluid out and bleed fluid into bottle, making sure you have no bubbles in the clear lines, and that the line is tight over the end of the Speedbleeder. Close them both and brake pedal should be rock hard with the engine off. If not, bleed until you get a rock hard pedal meaning you have no air in the system. Don't over-tighten bleed screws, just a light touch is all that is required, or you can break them. 12-16 Nm or 8-10 ft-lbs is all that is required for Brembo bleed screws typically. Usually start to bleed caliper furthest from master cylinder, so RR, the LR, the RF, then LF. I really see no difference in bleeding front outside or inside first, and OEM service manual does not say which to do first IIRC. When you bleed just one at a time, (usually the outside one first according to some people) most old fluid from caliper will come out the first bleed screw, then very little bleeding required to do the second to get new fluid to come out as the caliper has been mostly flushed of old fluid from the first bleeder (the sides of the calipers are linked via hard brake lines that go between them, so it is just one circuit. But with two bleed bottles, it doesn't matter if you bleed both at the same time. I use Genesis bleed bottles with the cable. There are tons of theories on bleeding brakes. I have tried them all. As long as your pedal is rock hard, it's fine. 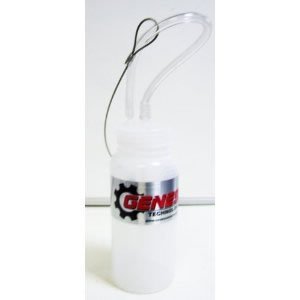 Back to Service & Maintenance